This article is sponsored by Invisalign®.  All opinions expressed are my own.

It is back to school time which means a flurry of school supplies, books, schedule changes.  It also means getting back into a routine!  And that is why it is also the perfect time for teens to see an orthodontist for a treatment plan. 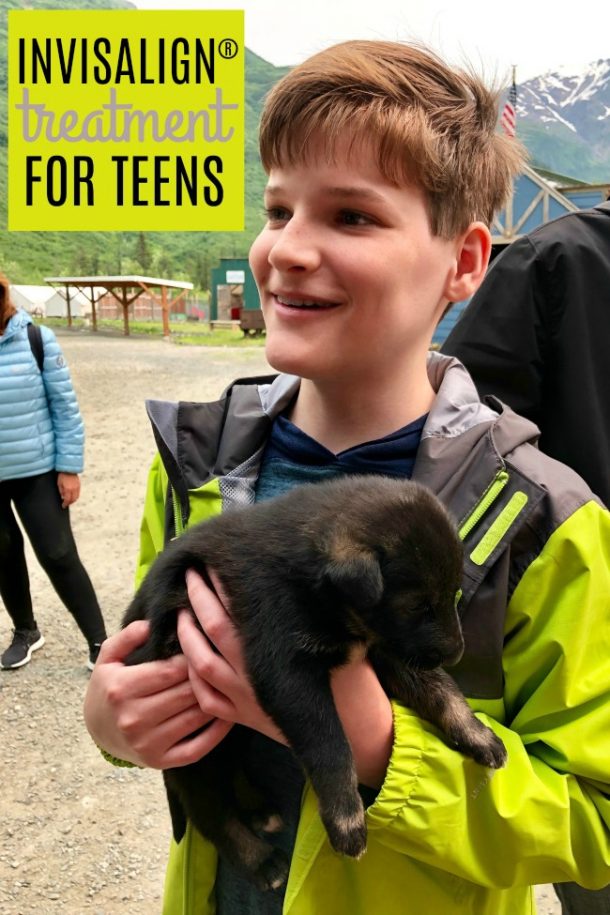 He started back to school yesterday and I was reminded once again that Invisalign has made this process quick and easy for our family.

My oldest son had traditional braces.  In fact, he had two sets of traditional braces and wore them for a total of more than 3 years through high school.  We had issues with broken brackets and broken wires.  He had trouble keeping his teeth clean–brushing around the braces and overall he was frustrated with having to WEAR braces nearly his entire high school experience.

My middle son, Reid’s experience with Invisalign was much different.  I was worried that he wouldn’t remember to wear them or that he would lose them, but he ended up being much more faithful and reliable than I was when I was in treatment!  His orthodontist says this is common.  That kids often out-perform adults when it comes to sticking to the treatment plan.  His treatment lasted less than a year and he reports that many of his friends didn’t even realize he was wearing Invisalign clear aligners at school. 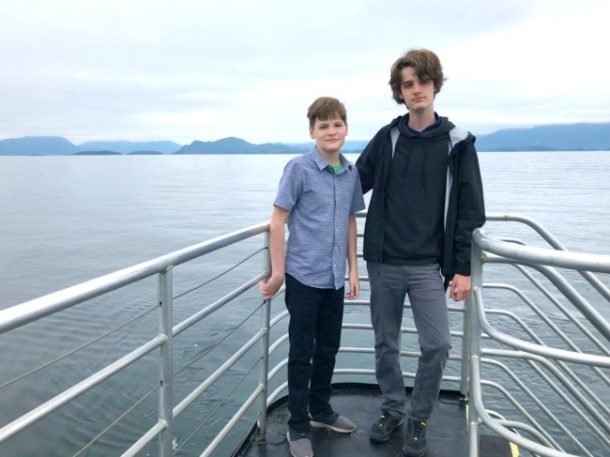 With my youngest, Rhett, I was concerned that his case was going to be too complicated for Invisalign treatment.  He had to have some teeth impacted and in the “wrong place” (that is my description, not his orthodontist’s opinion!), but when we had him evaluated, it was found that Invisalign treatment would work for him, it just would be in phases.  Invisalign aligners are backed by over 20+ years of innovation and have transformed over 6 million smiles.

We started Rhett’s first phase last year and he has been in treatment for about 8 months.

He has always been a really responsible kid so my main concern was how removing his Invisalign clear aligners before eating anything would work for him.  He is your average teen boy who loves to eat, snack and REALLY enjoys food!

What happened last school year is he got into a good rhythm of removing the aligners before lunch at school and then storing the aligners in his backpack for the afternoon.  The first thing he did when he got home was to brush his teeth and then put the aligners back in.  This still gave him the desired number of wearing hours each day that his orthodontist had recommended. 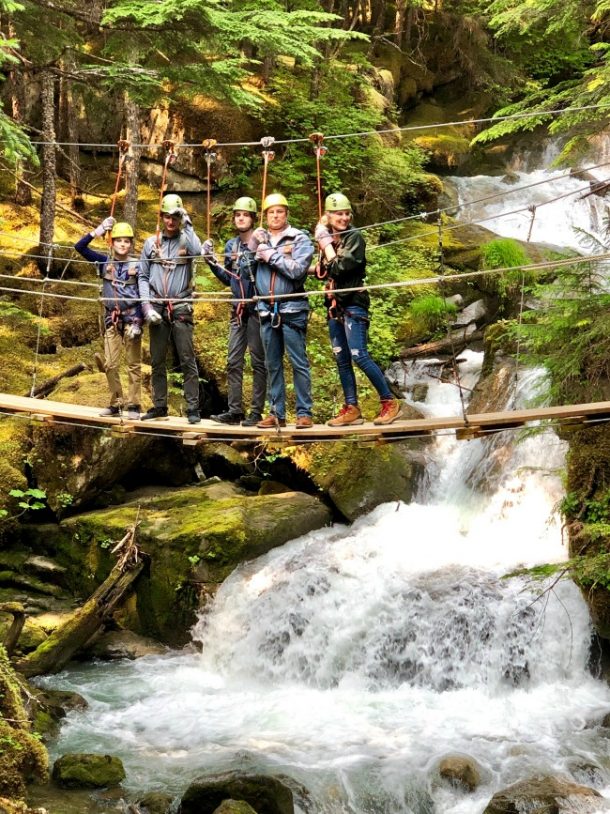 Over the summer, our schedule was VERY flexible!  When we traveled, he would often hand me his Invisalign container to put in my purse so when it came to mealtime he had a place to store his aligners.  He is so conscientious about wear-time.  I remember one instance this summer that we were on a boat in the ocean off of Alaska without the ability to brush his teeth and he was worried that the aligners would be out for too long that day.   I found it interesting (and encouraging) that making sure each day had the exact number of “wearing hours” was something that mattered to him.

Now that the school year is back in session, I think it is even easier on him.  He is back to his schedule in 8th grade of taking the aligners out for lunch and then replacing as soon as he gets home.

He has told me several times how relieved he is that he doesn’t have to wear traditional braces because of the way they look.

We are returning in another month to discuss phase 2 of his treatment with his orthodontist. 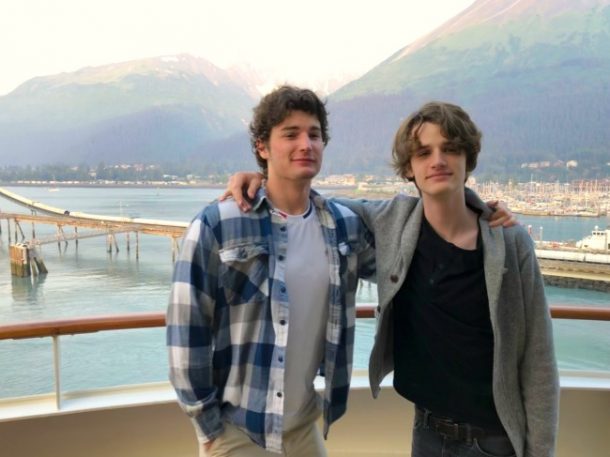 Ryan had traditional braces with Reid shown on Alaskan cruise 2019

We have not had an “Invisalign emergency”.  In fact, we hadn’t even had a lost or broken set of clear aligners.  I appreciate how much easier it is for the boys to brush their teeth.  I don’t feel like they have expert brushing skills in the first place, so not having to negotiate around brackets and wires gives them a better chance at success.  I also see the difference.  I don’t even notice when they are wearing clear aligners, but saw how self-conscious my oldest was when wearing traditional braces.  High school is hard enough without adding things to worry about! 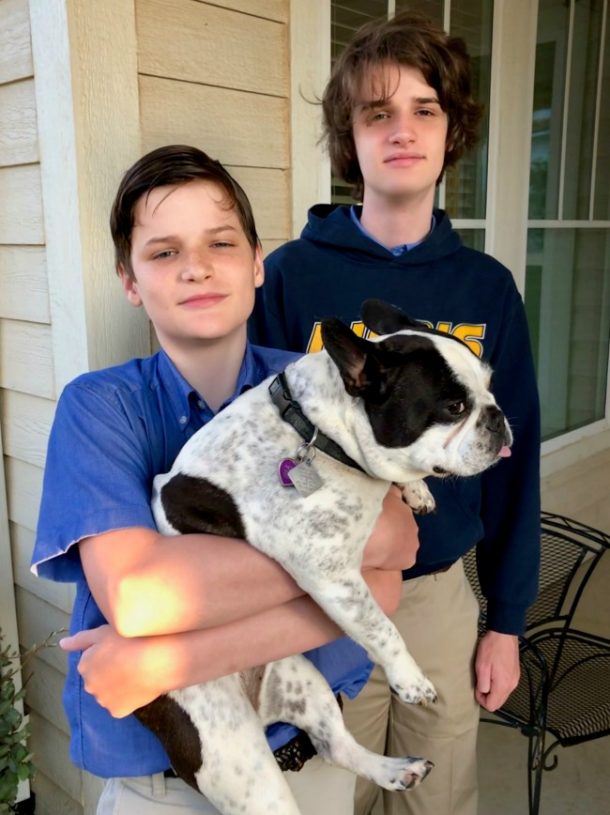 Starting a new school year is like starting with a clean slate.  It is a good time to get back on a schedule and look into if Invisalign treatment is right for your kid.  Invisalign treatment is the most advanced clear aligner system in the world.  It uses proprietary innovations, such as SmartTrack® material and SmartForce® features, which provide more predictable teeth movement**.  And like we found out with Rhett, Invisalign clear aligners can treat a range of orthodontic cases, from simple to complex.

**(compared to aligners made from off-the-shelf .03in material)

Find a doctor in your area that can evaluate your teen or preteen by clicking here.

Do you want to build a snowman?  Or maybe a snow globe?  With these Frozen 2 Snow Globe Surprise toys, you can!Exclusi...

If you love spring bird crafts as much as I do, this chickadee shapes craft is the perfect activity for you and your kid...

We love this fun and easy St Patricks Day Snack! Are you looking for a quick and interactive treat to celebrate St. Patr...

Does technology actually hinder learning? According to one private school in Australia, it does – and that’s why the...

February 27, 2020 by AllieThis mint shake is a delightful green, non-alcoholic drink for St. Patrick’s Day! This will ...

February 27, 2020 by AllieThis easy Easter Nutella Dessert recipe yields festive and delicious cookies. Because you can...

How are you celebrating February 29th? Check out these fun leap year activities for kids of all ages! What is a Leap Ye...